Cannabinol (CBN) is a mildly psychoactive cannabinoid found only in trace amounts in Cannabis, and is mostly found in aged Cannabis. Pharmacologically relevant quantities are formed as a metabolite of tetrahydrocannabinol (THC). CBN acts as a partial agonist at the CB1 receptors, but has a higher affinity to CB2 receptors; however, it has lower affinities relative to THC. Degraded or oxidized cannabis products, such as low-quality baled cannabis and traditionally produced hashish, are high in CBN.

What is CBN good for?

CBN is also a potent sedative that can potentially offer an alternative to traditional pharmaceutical for certain conditions. Some of the health benefits of CBN include: Pain relief: Research has shown that cannabinol can help with pain relief as it alters the pain signals that are sent to the brain by the neurons.

Cannabinol (CBN) is considered a mildly psychoactive cannabinoid known for its powerful sedative properties. When THC is oxidized, the degradation process converts THC to CBN(CBN Distillate), which may account for the sedative effect aged cannabis often carries. A 2700 year old grave excavated in China revealed preserved cannabis that contained higher amounts of CBN than any other cannabinoid.

CBN (CBN Distillate) is a byproduct of THC and is typically found in small amounts in most cannabis strains, however, many cannabis based options such as topicals, edibles, capsules, tinctures, vape cartridges, sublingual sprays and more may contain higher levels of this cannabinoid. CBN (CBN Distillate) was also the first cannabinoid to be isolated, previously thought to be responsible for the psychoactive effects of cannabis before the discovery of THC. 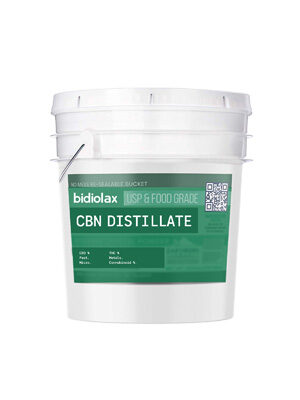